← more from
Auxiliary Records
Get fresh music recommendations delivered to your inbox every Friday.
We've updated our Terms of Use. You can review the changes here. 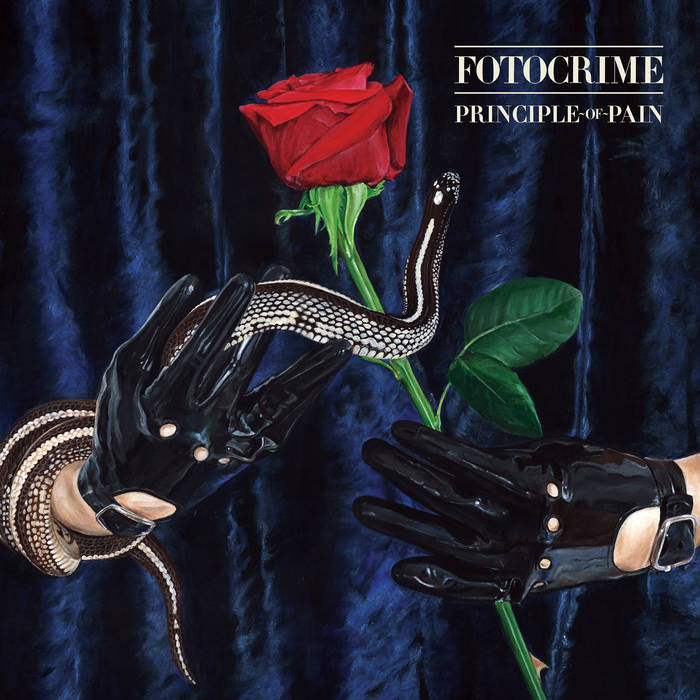 CoughCool FOTOCHRIME has such a mystical quality that just sucks me in Favorite track: The Soft Skin.

dramaofexile Really strong lyrics and delivery.. for me this is what stands out with
Fotocrime. Lyrics that really stay with the listener in a big way. Favorite track: Love In A Dark Time.

Gothwave with grit, lacking entirely the empty posh that has undermined other bands of this ilk in the past.

Principle of Pain is infectious, and while it will certainly appeal to existing fans of this sound, it definitely stands on its own in a world over-saturated with empty throwback bands and regressive pop music. Favorite track: Infinite Hunger For Love.

Nathan Neugebauer This album is really poignant right now. Like driving in a fast car, this album is over before you know it! My favorite part of the album is the way that the vocals are really clear, good job on the production! Go see them live! 8/10. Favorite track: Love In A Dark Time.

Following 2017's acclaimed EPs Always Hell and Always Night, the dark post-punk trio FOTOCRIME have announced details for their debut full-length album, Principle Of Pain. FOTOCRIME is the creation of singer, songwriter, and multi-instrumentalist R (aka Ryan Patterson, longtime tentpole of the Louisville music scene). Set for a May 18 release on Patterson's own Auxiliary Records, Principle Of Pain boldly returns drum machines and analog synthesizer sequencing to the forefront of the guitar-rock landscape, resulting in an album that confidently displays a mastery of song craft and stylistic range while crafting an distinct sonic identity.

Written and demoed in his home studio over the course of a year, R shared his work with no one before traveling to Baltimore to record the album with producer J. Robbins, a friend and collaborator of nearly two decades. The album was performed entirely by R, with a small handful of contributions from friends, including future FOTOCRIME band members Shelley Anderson and Nick Thieneman. Principle Of Pain is a deeply personal album, the singular work of an artist traversing the peaks and valleys of his obsessions, loves, and fears soundtracked by massive beats, warm synths, and guitars that veer from chiming cleans to blown out fuzz. The stunning original album cover artwork was painted by Chicago-via-Barcelona artist Noelia Towers, known for her beautiful, challenging artwork depicting elements of BDSM and feminine power. An in-demand painter and apparel designer, this is her first commissioned album artwork.

Following their April 2017 live debut, FOTOCRIME spent seven months extensively touring North America and Europe on their own successful self-booked tours, released the aforementioned EPs to fan and critical accolades, and established themselves as one of the most sonically and visually exciting new bands to emerge in the post-punk/alternative landscape, leading Revolver to proclaim "FOTOCRIME is darkwave heaven." Found drenched in fog with sunglasses on and collar upturned toward the world, FOTOCRIME commands both pleasure and pain with unshakeable cool determination.

and appearances by
Janet Morgan, J. Robbins, and Pete Moffett

Mille Petrozza stops by to talk about the new Kreator album, plus music by Trauma Bond